Home » About Our Parish

The Parish of St. Felix in Felixstowe is in the Diocese of East Anglia formed on March 13th 1976 and covering Suffolk, Norfolk and Cambridgeshire. The Cathedral Church is St. John The Baptist in St. Giles Gate, Norwich. The Bishop resides in the village of Poringland on the outskirts of Norwich.

The diocese is divided into seven deaneries. St Felix Parish in Felixstowe is a member of the Ipswich Deanery which also comprises the five Ipswich parishes, Aldeburgh and Woodbridge. The Dean is Fr John Barnes, Parish Priest of St. Felix in Felixstowe. The parish boundaries include Felixstowe, Walton and the Trimley villages. 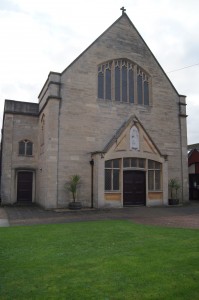 The last decade of the 19th century and the first decade of the 20th century in Felixstowe was a period of intense building activity, both public and private including the Orwell Hotel in 1896 and the town railway station which opened in 1898. In June 1899, the first resident Catholic priest, Father William Cooper, was appointed. There was no church, only a bare plot of ground in Gainsborough Road, purchased for the erection of a church some four years earlier for the sum of £488.

The young Father Cooper, barely thirty, said his first Mass in Felixstowe on Sunday 9th July 1899 in Mr Tiani ‘s lce Cream Parlour in Orwell Road, with a congregation of six! Father Cooper immediately set about erecting a tiny chapel, now the site of the present presbytery. The congregation soon outgrew this chapel, and from 1905, plans were made for a permanent church. After much discussions the various difficulties were finally resolved, and the foundation stone of the new building was laid in February 1911. The church was officially opened with great solemnity on 31st July 1912.

To the original sanctuary and nave, there were later additions of a sacristy and side chapels in the 1930’s, but it was not until 1958 that the church was finally completed by the addition of the baptistry and porch and an entrance in keeping with the inscription over the main door – Haec est Domus Domini – “This is the House of the Lord”. Surmounting the inscription is a statue depicting St. Felix in whose honour the church is dedicated. The church contains a collection of stained glass by the well-known firm of Hardman.

Due to the increasing population in the Trimley – Kirton, – Falkenham area, plans were made for the building of a new church in Trimley St. Mary. Thanks to the generosity of Mrs Celia Posford who had donated a plot of land to the Diocese in1963, work on the church, dedicated to St. Cecilia, began in August 1965 and was solemnly blessed by Bishop Parker of Northampton on 22nd May 1966. 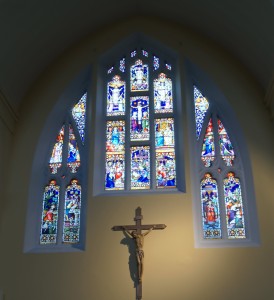 A long felt need in St. Felix Parish was for a suitable Church Hall in place of the existing inadequate building. That need was fulfilled when in July 1988, Bishop Alan Clark blessed the new hall which has become the centre of so many activities, not only of the parish but of the local community.

On the 3rd October 1990 fire tore through the concrete and wooden building of St. Cecilia’s leaving it a charred shell. A new church was built on the site with extra facilities and was dedicated by Bishop Alan Clark on Friday 25th September 1992.  As part of a re-evaluation of the needs and resources of the parish, St Cecilia’s church was closed in December 2010.